Stocks put in a strong third quarter, but the equity markets were mixed year-to-date through the end of the third quarter 2020.  The Dow Jones Industrial Average lost 2.7% year-to-date, the Standard and Poor’s 500 Index was up 4.1% and the Nasdaq Composite surged 24.5% on the back of a few out-performing, large-cap tech stocks.  Equity performance for the third quarter was solidly positive, with the DJIA gaining 7.6%, the S&P gaining 8.5% and the Nasdaq surging 11.0%.  This continuing recovery came following a terrible first quarter.  In the first quarter of 2020, the DJIA fell 23.2%, the S&P dropped 20.0% and the Nasdaq Composite erased 14.2%.   Following the close of the third quarter, the equity markets continued to improve, with all three aforementioned major indices now in the black, year-to-date.  In the longer-term, economic performance will be depend on labor force growth, productivity growth and real interest rates.  In the near-term, stocks will trade on the back of news about the presidential election and the path of and response to the Covid-19 pandemic.  We have been amused to hear both Trump and Biden supporters tell us that the rising stock market foreshadows a win for their favored candidate.  Both sides can’t be right, but, unfortunately, both could be wrong.  We will know soon enough (but probably not by November 4th).

Last quarter, we opined about the likely economic effects of a worldwide economic shutdown that is subsidized by government spending.  It is important enough that it bears repeating. The mountain of government debt issued to fight the pandemic will restrain economic growth over a long period.  The IMF estimated that the world’s twenty richest countries have earmarked 3.5% of their GDPs to the pandemic crisis. That is more than they spent at the depths of the Great Financial Crisis.  The IMF further estimated that gross fiscal debt in advanced economies will expand 16% this year, to 122% of GDP.  Central banks have enacted measures to keep the cost of debt low.  The U.S. Treasury yield curve is barely discernable, with short-term rates at close to zero, and longer-term rates in the “why bother” range.   The 2-year now yields 0.14% versus the 0.73% yield of the 10-year note.  At the beginning of 2016, the 2-year paid 1.02% and the 10-year yielded 2.24%.  The 2016 interest rates were very low historically; the 2020 rates are microscopic.

The current low level of interest rates around the world is not the result of the normal function of price discovery in the capital markets.  It is the result of a coordinated manipulation of supply and demand by central banks.  How did we get here?  In 2008, in response to the Great Financial Crisis, central banks threw out the playbook and broke almost all of the tried-and-true banking rules.  Creditors were bailed out, debt and equity prices were propped up, marginal assets were added to central bank balance sheets.   Moral hazard became institutionalized.   We were assured that these excesses were temporary, and that they would be worked out after the crisis passed.   Central bankers treated markets as overindulgent parents treat spoiled toddlers, and much to the same effect.  A decade on and no improvement was made, as central bankers were unwilling to roil the markets with sorely needed discipline.   Spoiled toddlers grew into incorrigible teens, and then came Covid-19.  The government and the Fed originally envisioned a fiscal and monetary response of about $600 billion to transition the country through a two-week mandatory economic shutdown, intended to protect our fragile hospital and healthcare infrastructure.  Within weeks, the financial package swelled to $4.0 trillion, more or less.  Within months, the stated purpose of the lockdown became much more inchoate and obscure.

“Flattening the curve” was always intended to be a delaying tactic, not a preventative one.   Early on, our public health officers told us that a drawn-out, flattened curve would encompass a similar death count as a towering and sudden curve, less those saved by avoiding an overtaxed hospital infrastructure.  Today, public health officials don’t address the pandemic curve at all.  Running faster has not aided our sense of direction.   Eventually, the pandemic will pass, either because of natural burn-out (from antibody and/or T-cell resistance) or because of an effective vaccine.   But, the debt will remain.  Federal Reserve Chairman Jerome Powell has been lobbying aggressively for additional fiscal stimulus in the face of the pandemic.  Given the debt already outstanding, a large package of fiscal stimulus will undoubtedly put the Fed in a position whereby it will have to manage interest rates to make debt coverage affordable.  In other words, the Fed will become politicized and eventually lose its vaunted independence.  Central banks have traded long-term stability for short-term gains paid for with increased debt.  There will be a reckoning.  If we are lucky, it will be inflation and much higher taxes.  If we are unlucky it will be a worldwide financial crisis.   This is not a near-term prognostication—it will take years to play out.

We have been frustrated for months at the relative inaccessibility of good data about the pandemic.  The WHO and the CDC have historically provided coherent data sets and reams of information.  Not so much these days.  Information is often inaccessible, siloed or inconsistent.  Older unreliable data is left on their websites without explanation.   Even worse has been the media coverage, which seems often to have been written by reporters who are both incurious and innumerate. Often little data and no context is cited.  We are not alone.  Franklin-Templeton (a mutual fund company) teamed with Gallup to survey internet users about their knowledge of the pandemic.  The results are elucidating (See Appendix 1).  On average, Americans surveyed believed that people aged 55 and older accounted for just over half of total COVID-19 deaths; the actual figure is 92%.  Americans surveyed believed that people aged 44 and younger account for about 30% of total deaths; the actual figure is 2.7%.  The survey respondents were remarkably ill-informed about their relative risks, on average.  Younger people overestimated their risks, while older folks, who are disproportionately at risk, underestimated theirs.

To take a snapshot of one state that provides pretty good data, we go to the New York State Department of Health Covid-19 web page.  New York State has 19.4 million residents.  The DoH reports 25,618 fatalities to date.  Of those who died, 90.1% had one or more comorbidities (such as hypertension, dementia, diabetes, cancer, heart disease, stroke, etc.).   Two-thirds (65.8%) of the fatalities were above the age of 70 years old.  Only 5% of the fatalities were below the age of 49.  Fatality risk is disproportionately concentrated among the aged and ill.  If you are in that group, please take prudent precautions, because the risk is real and serious.

To take a snapshot of the entire U.S., we go to the Worldometer aggregation site (https://www.worldometers.info/coronavirus/country/us/) . The U.S. is a country of 331 million people which has seen 8.2 million confirmed Covid-19 cases.  So far, 5.3 million cases have recovered, and over 222,000 patients have died, either of or with the disease.  There are 6,146 hospitals in the U.S., according to the American Hospital Association.   That averages to one hospital per 54,000 residents.  In those hospitals, there are about 71,000 Intensive Care Unit (ICU) beds.  The Covid Tracking Project ( https://covidtracking.com/data/national/hospitalization) reports that there are currently 6,804 Covid-19 patients in ICU beds, which is down from 15,013 in ICU in April and 10,539 in late July.  There are now 1,667 Covid-19 patients on ventilators, down from a peak of 7,070 reached on May 7th.  Before Covid-19, the government’s Strategic National Stockpile of ventilators stood at about 12,000.  Today, it is 120,000.  The 7-day moving average of new cases now stands at 53,000 and is rising.  The 7-day moving average of newly reported deaths is 717 and is flat or declining.  See Appendix 2.  We have also attached the Daily New Cases and Daily New Deaths charts for New York State, which had a hard lockdown, and Sweden, which did not lockdown, but encouraged social distancing and closed high schools and colleges (Appendix 3 and 4).  We hope that this data helps to provide some context for the pandemic.  If you are older and/or have comorbidities, please take precautions.

Finally, in Appendix 5, we provide a recent Gallup Panel surveying Covid-19 attitudes and behaviors according to party and gender.  The slide does not include responses from independents, to highlight the stark disparity between Democrats and Republicans.  Wow.  If governing can be defined as the ability to impose your views on an entire population whenever you hold a tiny majority, then we might be in for a rough year, irrespective of who wins the election.  If your family is not completely consilient in its political views, we urge you not to host Thanksgiving.  If you do host Thanksgiving, do not serve cranberry sauce, as it stains the upholstery when thrown (Appendix 6).

We live in interesting times, but we must try to be disciplined and ignore the tumult.   Our chosen path:  a long-term perspective on equities, a reasonable allocation to quality fixed income securities (without reaching for ephemeral yield) and a cash reserve.  May you and your family enjoy the Thanksgiving holiday and good health.

Your Team at Baxter Investment Management 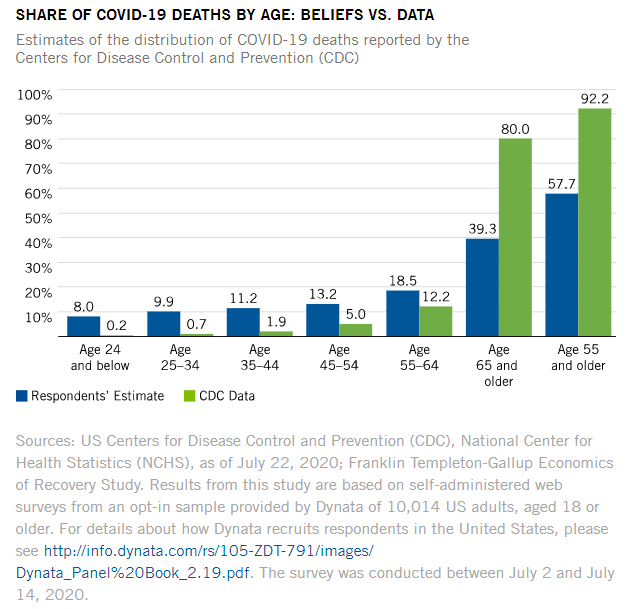 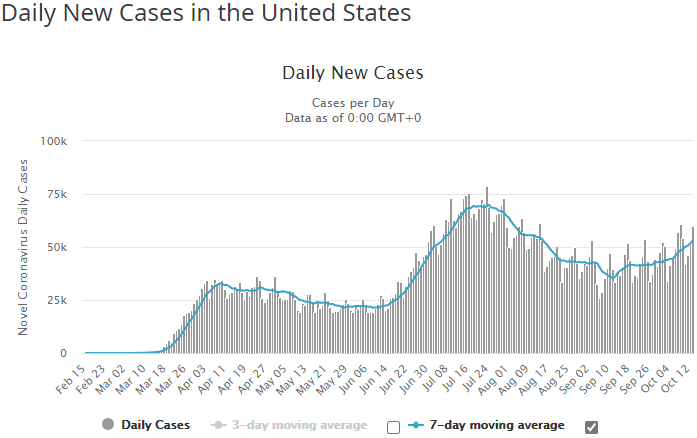 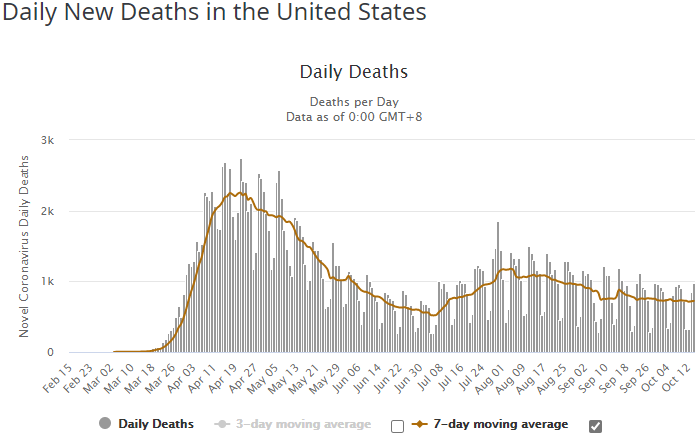 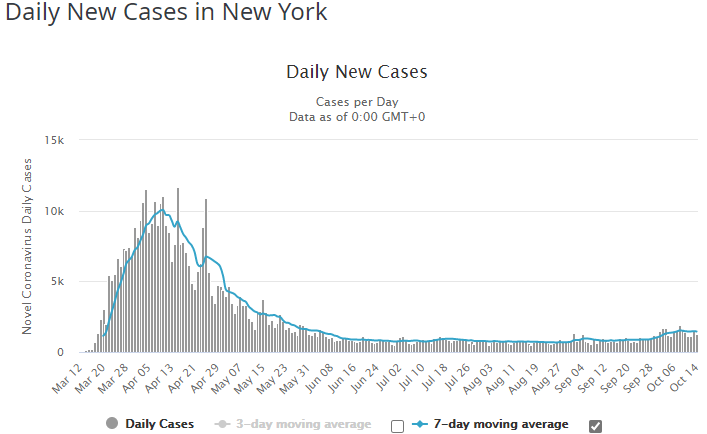 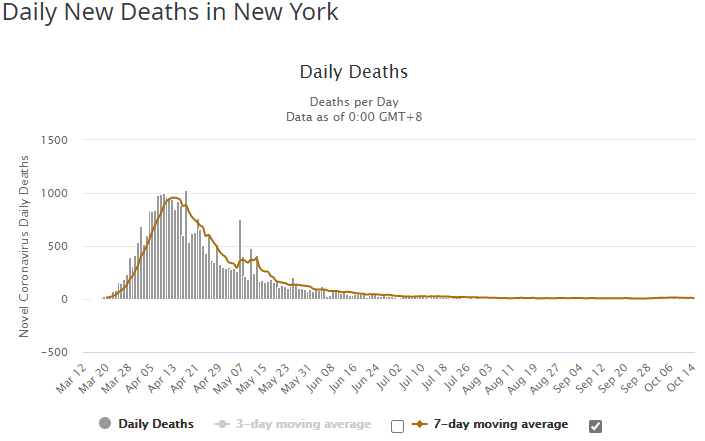 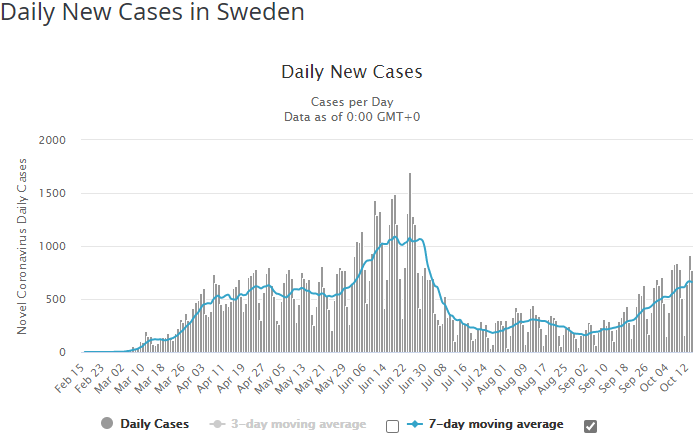 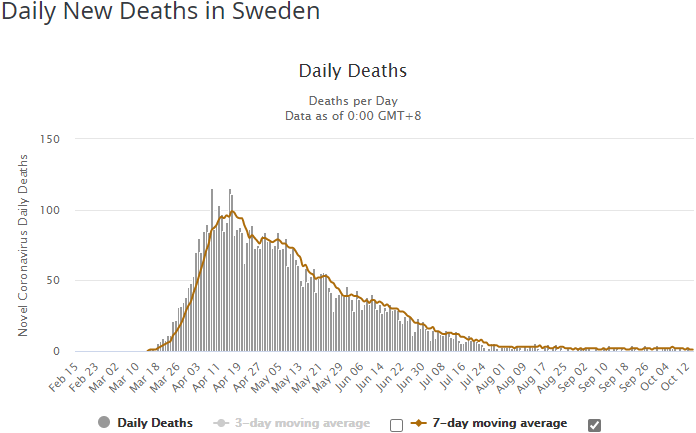 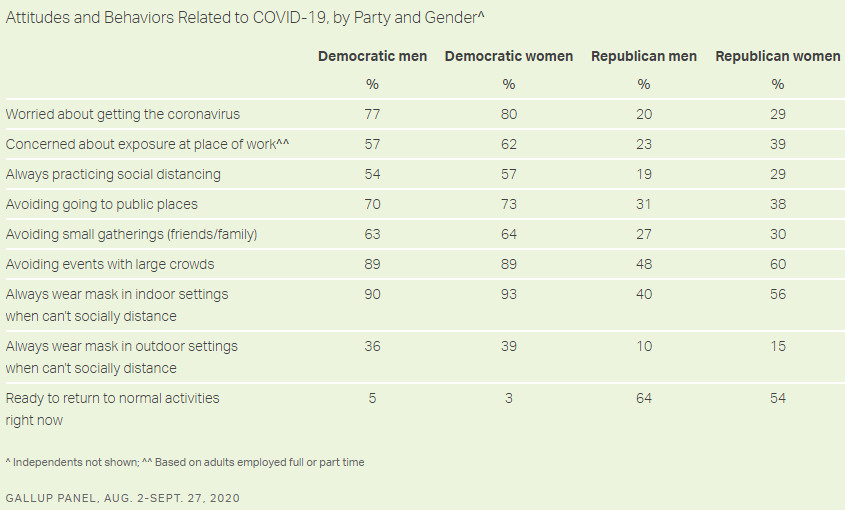